Hello there and welcome back to read about my London adventure! If you haven’t read the first part you can find it from here: Travel Diary: London Also if you are wondering where the day 3 disappeared it will have its own post later on.

Why? Because otherwise this post would have been too long and I really want to dedicate whole post for Harry Potter studio tour and Madame Tussauds museum. But now let’s continue the story! (And btw thank to my sister who took that crazy bird photo… She is fearless!)

I recommend living in hotels with breakfast because finding something to eat sound easier than it is in reality. Once again buying breakfast was causing us unbelievably huge problems. You would think it’s easy to find breakfast cafe from London but that’s total fantasy. We walked the whole few kilometers to the Natural History Museum without finding any cafe for us to eat.

First we went through the security check where they didn’t check us properly like too often in these situations. Apparently Finns or our lost selves don’t seem dangerous enough to need proper security checks. After that we continued our mission to find breakfast and managed to find the most unhealthy but tasty looking chocolate cake I have ever seen. Of course we bought pieces of it for us to have as breakfast.

I have few words about the free Natural History museum. Dinosaurs, mind games and huge whale. Yep, that sums up our morning. Besides us there was a lot of school classes. When we left the museum we even accidentally walked in one of the school groups and got some wondering looks from the teacher.

After surviving out of the museum (we didn’t go to every exhibition because it would have taken the whole day!) it was time to go shopping. We went to a few shops but in the end did most of our shopping in the Primark. Don’t judge me, I’m student and live on my own so shop full of cheap clothes is like a heaven.

I bought two more pairs of the jeans I had bought the last time. Even if those jeans made me looks like a smurf after I took them off. That feature is still part of them. I don’t know if I should be worried of them leaving ugly blue color to my skin? Well, at least the jeans only cost like 7€.

But yeah that was our fourth day. The evening went planning our last day, buying some bubble tea and starting the impossible packing. I had totally forgotten how much I loved bubble tea. I even bought matcha one because it’s one of the foods I can’t get from Finland and I think I can’t live without!

We didn’t have a lot of plans for our fifth day but ended up doing a lot. Our first stop was breakfast at Hard Rock Cafe. We had been arguing (well not arguing but just being indecisive together) should we use the metro or walk through Hyde Park. We ended up doing the last one and it was good decision!

We saw more birds on our way and even crazier tourists trying to hug and befriend the birds. (You shouldn’t do this. Bad for the animals and unhealthy for you..)

When we finally found the Hard Rock Cafe it was closer us than we had tought. The staffs were kind and place amazing so definitely recommend for everyone to go when in London! It was meant to be our breakfast but we both ordered cauliflower burger. It was vegetarian dish where the hamburger steak was replaced by cauliflower. I would eat all my burgers like that if it was possible.

At this point it didn’t even matter that our breakfast was so fulfilling because we had eaten odd breakfasts everyday. Bento box, Fish & Chips and chocolate cake to name some of our crazy breakfast choices. But hey, we were on vacation so no reason to eat reasonably.

After the fulfilling meal we continued towards Buckingham palace and the royal shop we had promised to visit for our mom. Luck was on our side because once again the walk was shorter than we had expected. And on when we arrived to the palaces gates there was someone (probably important person) exiting the palace in horse carriage. So cool!

After the palace gates experience and realizing there was nothing to buy in the royal shop (just normal more expensive souvenirs) we decided to continue our walk. Next destination Big Ben!  I know we already went there once but my sister had forgotten her polaroid camera so we had to return to take photo for her. 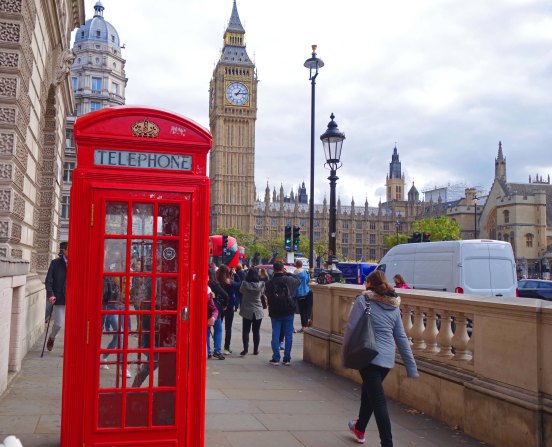 Once again good decision because this time we decided to be more touristy than on the first time and lined to take photos of us with Big Ben and red phone booth. It was so funny how people would pose with the booth and even more people line up to wait for their turn to take the photo. No way for anyone to really use those phones to call. Tourist takeover!

Surprisingly even after taking some photos and buying souvenirs from stall next to the Big Ben we had almost half of the day left. It was time to head to get some culture experiences and what would be better place for that than Tate Modern museum?

The museum was huge. I mean I had known there was many floors and exhibitions but it was bigger than I would have never imagined. In my opinion too much art to see in one day. I have always loved museum and modern art and this museum immediately rose to one of my favorite museum. And one important point to mention is that the museum was free to attend.

We even found one exhibition from Finnish artist. We were wondering out loud why would there be Finn’s works in this popular museum when behind us woman said in Finnish “Why not?” and disappeared as quickly as she had appeared. I never get used to other Finns leaving our beloved home country and making contact on odd places.

After the museum visit it was time to return back to our hotel. We packed our too full suitcases and tried to sleep early because the next morning it was time to leave.

We woke up too early to make it to our plane. First we had to take metro to the train station and then find the right train. I thought we would have more problems but fortunately the trains station has prepared for tourist and there is huge signs to find the right track.

We arrived early to the airport but then suddenly we almost had to run to make it to our flight. The airport really is huge. And the plains to Finland leave from the farthes corner possible. No, I’m not even kidding. We had to walk trough the whole airport to get to our gate.

This time I sat next to my sister but it was causing some problems. We wanted to see the same movie so if one of us was ahead the other one got spoilers before hand. Can someone make the plane TV’s sync and show the movies at the same time? Let’s just go back to the time where everyone had to watch Brain Games from the shared tiny TV.

So there was my London travel diary. I hope you enjoyed my long boring commentary. Have you ever been to London? And maybe done some of the things we did?

I will write again next Friday with the story and review from Harry Potter tour and Madame Tussauds. Have an amazing weekend!