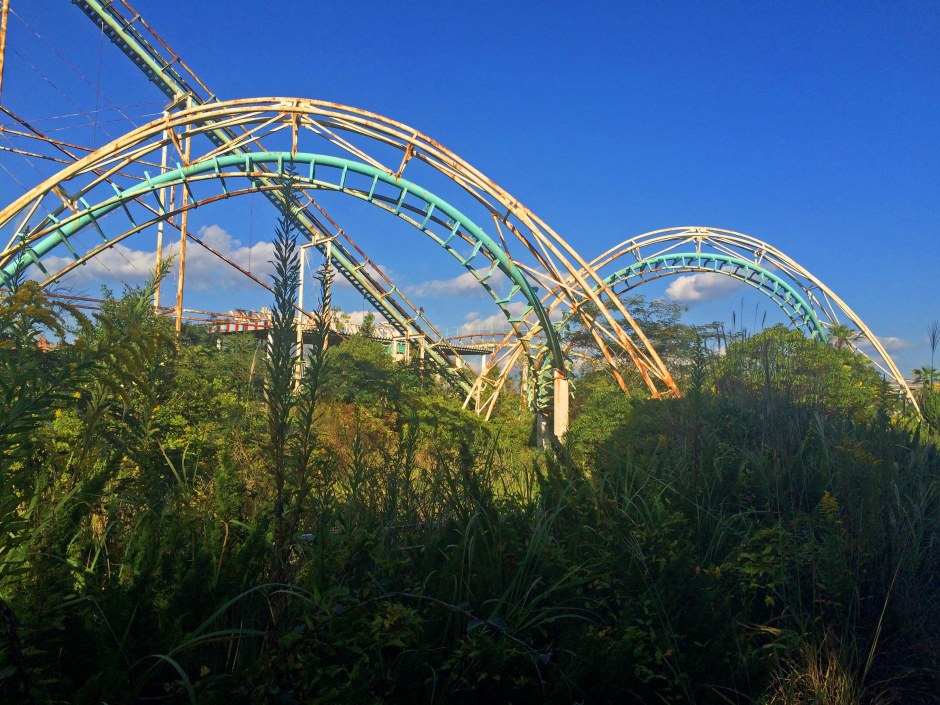 So last time I ended my story to the point where I was deciding should I go to the abandoned amusement park with these people I have just met. In the end it wasn’t hard decision (sorry mum…). Of course I went in! You only live once or something like that…

I will again mention that you shouldn’t be like me. Later on this story I learn that visiting abandoned Japanese amusement park in fact is illegal and you will get in trouble. However I also learn that Japanese people and police are so kind and understanding. And I also may learn that there is something charming and special in abandoned places. It’s feeling I can’t even describe. So I hope you like this long boring story of me being totally lost like usually. Enjoy!

(In the first post I meantioned that I had lost almost all my abandoned amusement park photos. However, now I found a few photos more so I hope you will like them!) 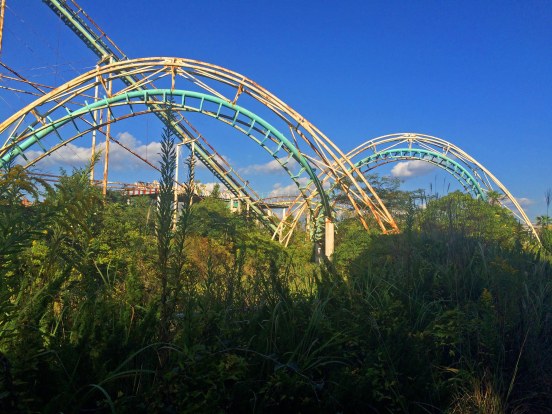 So I was standing next to the abandoned amusement park and the couple I had just met stared me expectantly. After I answered for them all three of us approached cautiously the park’s gate. There was huge gap in the gate and we went inside without any problems.

My first look to the park made me breathless. Cute pastel houses, colorful plastic balls and eerie huge pink princess castle. It was perfect sight and I immediately knew I had done the right choice coming here. We started wandering around and checking what we could find. The couple was taking photos like professionals while I was just staring everything in awe.

After walking around for a while I decided it was time to part from that kind couple. After every minute I was feeling more and more like third wheel. After our goodbyes they continued towards the castle while I decided to wander deeper to the park. When their voices had faded to the distance I felt the scary “I’m all alone in this world” feeling hit me. 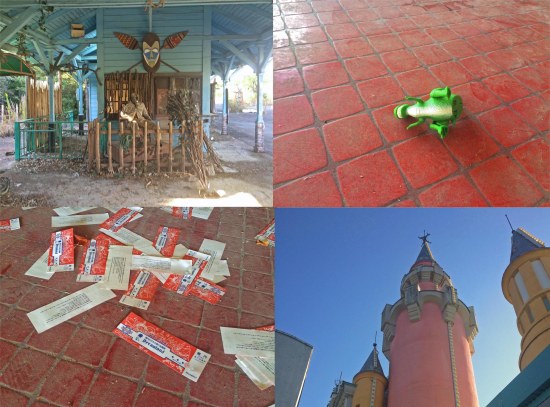 I couldn’t hear birds, traffic or anything except my own breathing and wind. I have never really experienced anything like that so I decided to enjoy every moment and thing there was to see. First I found old roller coaster loop. I think photo of this exact spot is in every abandoned places article/video there is in internet. I hope I had all my photos because it was beautiful. (I don’t know how the heck did I lose half of my abandoned amusement park photos…)

I just stood there staring in awe and not even wanting to continue. How would anything I saw be more beautiful than that? Sun was shining behind the roller coaster and the sky was blue without any clouds. Once again perfect day and perfect moment. 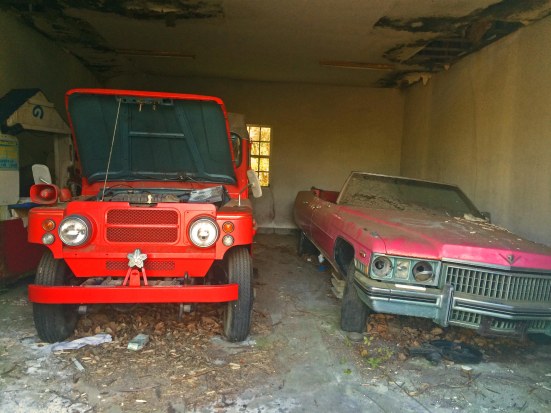 After that I saw so many beautiful sights that lose the count of them. Huge swimming pool and water park are with its colorful slides and small food stands. Abandoned cars just being there behind every corner. Building after building full of stuff.  Park tickets, colorful props and dust covering everything except the foot prints wondering back and worth the floors.

It had been over hour at that point and I haven’t even seen half of the park. I saw some kind of  pond and decided to take closer look to it. The ride was adventure and amazon themed. There was sinking colorful boats in the small lake. Then I turned to look the ride’s ticket booth and at the same second started to run and hided behind wall close by. My heart was beating too loudly and for moment I was sure this place was cursed.

I tried to glance the sight that had scared me almost to death. It still looked same. There was someone sitting in the ticket booth. Someone without head and looking like rotten body. After I had evened out my breathing I decided to take closer look. My reasoning side told me there was no way that it would be real body. My more imaginative and scared side was sure it must be zombie or cursed traveller. 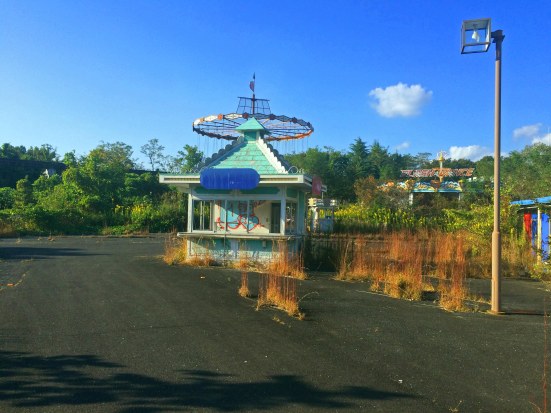 I went closer and closer and soon realized theobvious truth. The scary headless zombie body was just prop or decoration for the ride. Someone had propably stolen its head and arranged it there to scare all the intruders like me. The whole situation was making me laugh and I was letting out the sigh of relief when weird noices broke the silence and made me jump back to my hiding spot.

After listening closely the weird noices seemed to be car driving by except I didn’t see anyone. Later on I will realize that it must have been the guard but at that moment I just tough there may be road close by. The noice was gone almost as fast as it had began and I was ready to continue my exploration. 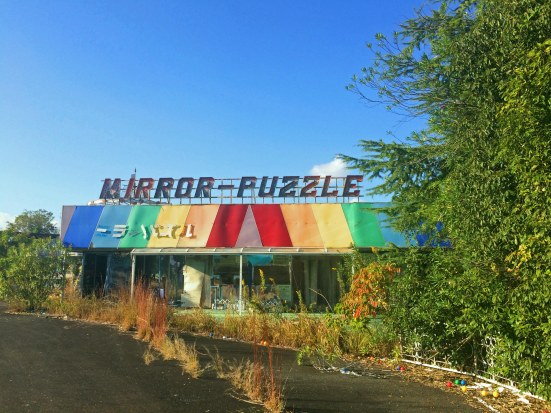 I saw some more interesting thins: merry-go-round, more rides and another roller coaster. It was silent everywhere. Next spot I spend more time in was mirror house. Once again I was strugling with easy question: to go and adventure the inside or stay safely outside? The broken mirrors and messages left to the walls made the place look like scene from horror movie.

I had to jump over some broken pieces so I didn’t get wounds through my sneakers. I got totally lost. There was mirrors everywhere – some broken and some colored with spray paints. I kept walking around not understanding how would children’s amusement park have this place in it. Then I realised every now and then there was small arrows pointing the right way out.

After exiting the house of horror mirrows I continued towards the huge castle I had decided to visit last. I didn’t know how wrong the end of my happy day in abandoned amusement park would soon go! (Well, I had fun and can now laugh for the things that happened but at that time it was horrible…)

So well… I may have problem with writing too long stories… Because of that you have to wait until next week to read the ending of my story (and also the main point where I get caught by Japanese police…) I’m sorry, I’m bad at not sharing too much boring things. But I hope you enjoyed my story or at least the photos.

I hope you are having an amazing week!
With love,