The story of me in abandoned amusement park continues…

Like I said I had just visited the broken mirror house and was now walking towards the beautiful huge princess castle. It was amazing. I climbed up the stairs and was welcomed by graffiti and sunshine. Up there I was able to see the whole park. Even the gate I saw my two new friends walking towards. They were leaving and I thought it was my time to leave too. But like the saying goes curiosity killed the cat.

After taking in the park around me I decided to climb down and continue my trip around Nara. I was just ready walk outside from the castle when I heard some noises. Automatically I hid behind the abandoned castle’s door. I may have also chanted “there is no such a things as ghosts and paranormal” in my head while listening the suddenly too quiet park. I decided the noises must have been caused by wind and continued my way out of the abandoned park. 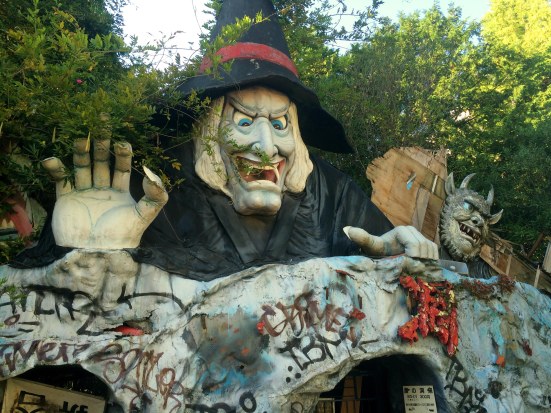 Then I saw funny witch and haunted house. Of course I decided to take closer look! Probably bad decision but I am good at making those so get used to it.

After exiting the haunted house (super haunted and scary!) it was time to leave. I started to make my way towards the front gate when I saw other people between me and the gate. Once again I hid. No way I would go and say hi to randoms in abandoned place! I’m not that crazy…

So I walked towards the other way wondering what should I do. Then I saw car driving closer to me and I knew that I was in trouble. I had a few seconds to decide should I hide or stood there and wait for the inevitable. There was no way I would exit this park trough the front gate when there was people and I wasn’t going to hide in abandoned amusement park waiting for darkness. I stood there and was ready to panic when the car stopped right next to me.

Angry looking older Japanese man stared me and tried to communicate with me using word “stop” and Japanese that I couldn’t understand. I kept apologizing because I had no idea what else to do. The moment was totally chaotic and the man seemed to be as panicky as I was. Apparently tourist girls don’t usually get lost to abandoned amusement parks.

(Why only boys have privilege to do reckless adventures?)

At that point two more guards arrived with their cars and there was more angry babbling in English and all I could understand was that English speaking police was coming to make everything better. Great, I was totally in huge problems. We waited for a few minutes me apologizing and the guards trying to look angry before the first polices arrived.

This duo of two males was like straight from Japanese crime dramas. If I hadn’t been too busy to apologizing I would have probably found it amusing. Of course these two man didn’t speak English except for few basic words.Another of them was talking to the guards while the other one tried to calm me down despite our language barrier.

Then a few more polices arrived but they didn’t speak English either. At this point someone was trying to inspect my passport while calling to someone and other polices where just hanging around. And then there was those two polices that had first arrived who still tried to come up way to communicate with me. It was total chaos. 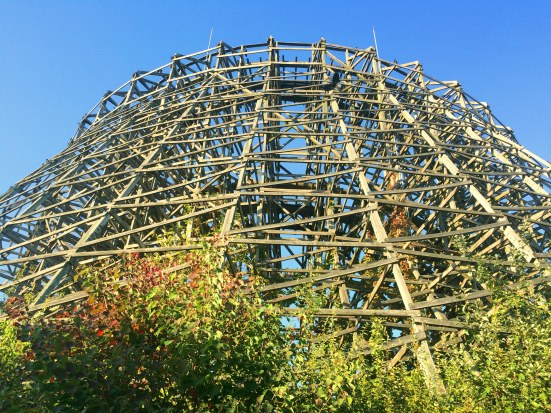 Finally young police woman arrived with her perfect English. She explained that I couldn’t be here and tried to ask where my companions were staying. It took too long to explain that I was totally alone here and that I really wasn’t hiding someone somewhere. I of course told them that I had seen other people here today and they weren’t even surprised about that. Apparently they get asked to come and make people go away every day.

I have to say I was finding the situation rather strange than scary. I was standing in colorful wonderland with eight polices and three guards. Did they think I was some kind of super villain? I mean who needs so much forces to escort traveller girl out of abandoned amusement park? But I grant them that if I had decided to run at least they would have had enough people to catch me…

After short interrogation (that felt more like friendly conversation) I was made to apologize once again. I had done it constantly after getting caught so one more time wasn’t problem for me. Then the two first police men and the English speaker promised to drive me to the shrine I had tried to find in the first place.

Then we had to stop because two traveller boys were walking towards the amusement park. One of the two policemen opened his window to ask where the boys were going to. We all know what their destination plans were but of course no one said anything. Then the polices asked them to not visit the amusement park because it was dangerous and they would get in trouble. The policeman gave knowing look towards me and that must have scared the boys who promised to not go and continued their way quickly.

After that I got some tips where to visit while being scared for my life. Japanese streets aren’t made for cars… And finally we found the shrine that just happened to be wrong one but I didn’t dare to tell the truth to the kind polices. However it was beautiful place so I have to thank them taking me there.

In the end the trio wished me good luck and made me promise to share this story with my friends. Apparently they wanted everyone to know how kind and friendly Japanese polices are.

So, yeah that was the too long story of me getting in trouble with police for the first time. I hope you liked it or at least enjoyed the photos. Next Friday I hope I can write something more travel related or Christmas themed. See you then!